All ShotByNess images seen on this site are available for purchase by clicking on the image or its name. 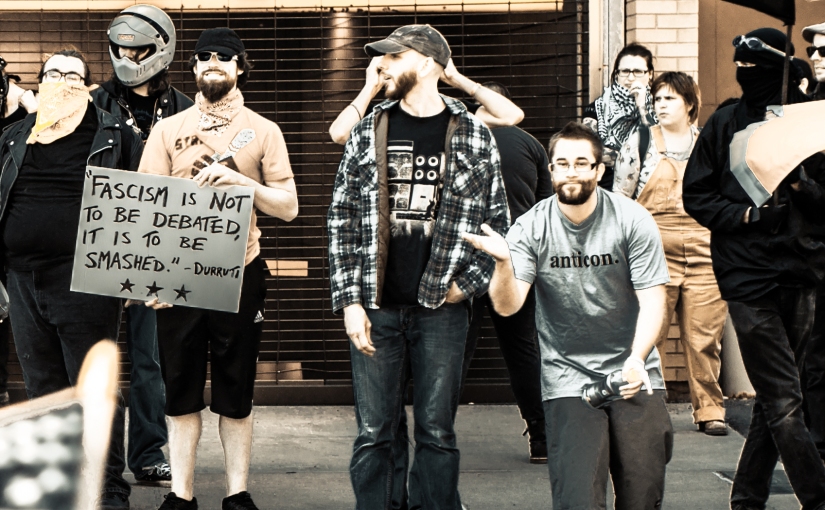 Fascism Is Not To Be Debated
by
Shot by Ness
© RiverHouse Group of Caughdenoy, new YorK, LLC

I felt this image today. I felt like this is where our country is. I haven’t put anything up in a while because I’ve been a health thing. We’re getting a handle on it with the help of the American health care system and insurance. Even if I’d been well, I don’t think I would have posted much. The world is just so depressing.

We have a child as President and everyone knows it. However, some group of us are so afraid of being wrong that we pretend he isn’t. We fall for the creation of mystical monsters to fight and fear. Media! BLM! Russia! Alt-Right! Fear them! Run screaming in the night. Be sure to carry your weapon to show just how scary you are. All while screaming in terror on the inside. Because you are afraid?

Unfortunately, we are also all stupid. Too stupid to even know what we are afraid of. And just stupid enough to be manipulated into believing that our fear comes from somewhere other than the ruling powers.

Right now, Donald Trump is engineering a Tax Reform to benefit him, and those like him, alone. All while not even letting us have the basic information to understand just how much he is rigging the system to his own benefit.

One by one the principled members of the Republican Party are dropping away while the remainder become more sycophantic to our man-baby President. They bow and scrape as he continues. Continues in lumbering about in his incompetence. Continues in causing us to have to, once again, worry about the specter of nuclear destruction. This time because of the ego of a man with small hands. And an obsession about that fact. Small hands and large weapons. A Freudian nightmare.

Evidence is coming out in drips and drabs. And it all seems to point to a cosiness with our primary adversary that no patriotic American should tolerate. Patriots have died in conflict with the Russians. We’ve spent blood and treasure that should not be forgotten. It should not have been in vain. Yet, our Chief Executive has all but offered to publicly fellate Vladimir Putin.

No one ever starts off with the intention of becoming a fascist State. It happens when the people stop thinking. When they put their loyalty to a person or a few people above their loyalty to the country. It happens when you can shoot a person on Fifth Avenue and still be supported. Or when you are accused by 24 women of sexual harassment and/or abuse and still are supported. Or when you are on tape admitting adultery and sexual assault. A tape that was played on network television.

Come back, America. The world needs you.

Between these two classes a struggle must go on until the workers of the world organize as a class, take possession of the means of production, abolish the wage system, and live in harmony with the Earth.

We find that the centering of the management of industries into fewer and fewer hands makes the trade unions unable to cope with the ever growing power of the employing class. The trade unions foster a state of affairs which allows one set of workers to be pitted against another set of workers in the same industry, thereby helping defeat one another in wage wars. Moreover, the trade unions aid the employing class to mislead the workers into the belief that the working class have interests in common with their employers.

These conditions can be changed and the interest of the working class upheld only by an organization formed in such a way that all its members in any one industry, or in all industries if necessary, cease work whenever a strike or lockout is on in any department thereof, thus making an injury to one an injury to all.

Instead of the conservative motto, “A fair day’s wage for a fair day’s work,” we must inscribe on our banner the revolutionary watchword, “Abolition of the wage system.”

It is the historic mission of the working class to do away with capitalism. The army of production must be organized, not only for everyday struggle with capitalists, but also to carry on production when capitalism shall have been overthrown. By organizing industrially we are forming the structure of the new society within the shell of the old.

– Preamble to the IWW Constitution

– Hillary Clinton defining who is deplorable

Everyone has the right to freedom of opinion and expression; this right includes freedom to hold opinions without interference and to seek, receive and impart information and ideas through any media and regardless of frontiers.

What difference does it make to the dead, the orphans and the homeless, whether the mad destruction is wrought under the name of totalitarianism or in the holy name of liberty or democracy?